iPhone 7, Charms, and Description of Children to be Abducted Found on Female Kidnapper Burnt to Death in Ikorodu 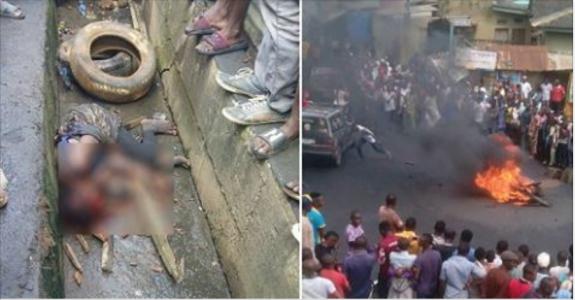 An alleged female kidnapper was lynched and burnt to death in Ikorodu area of Lagos, after she was reportedly caught trying to kidnap some school children.

According to reports, a man selling meat at Allinson Junction and an Aboki selling fruits at the same Junction, close to United High School, Ikorodu raised an alarm after the said woman who was acting like a “mad person” suddenly went to a corner to receive a phone call.

She was reportedly questioned on her mission in the area but she could not give a genuine reason on why she was playing lunatics.

The burnt lady was handed over to the Local Vigilante Office where she was interrogated further by the Deputy Chairman of the Vigilante group.

A search conducted on her led to the discovery of an iPhone 7, a juju ring, and then a list that contains descriptions of children (age range, prices and height) in her bag.

The deceased reportedly confessed that she came all the way from Isolo, and that she didn’t come along, but then her other accomplice fled, immediately she was caught.

The Vigilantes called the police to take the suspect away, but before the police arrived, a mob that had already gathered were calling for her head. They were demanding for Jungle Justice to be carried out on her.

As the Vigilantes couldn’t handle the crowd, they took it upon themselves to take her to the police station. Unfortunately, the crowd were too many for them to control.

She was later beaten and burnt to death with her bag containing the list and juju ring.

Most entertainers are broke, COVID-19 has shown who saved for the rainy day –…