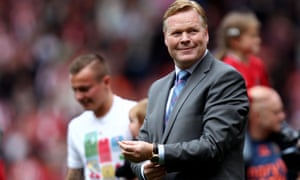 Ronald Koeman is expected to be appointed Everton’s new manager within 48 hours after Southampton accepted a compensation package worth around £5m for the Dutch coach and members of his backroom staff.

Farhad Moshiri, Everton’s major shareholder, identified Koeman as his leading candidate to succeed Roberto Martínez after deciding to end the Catalan’s three-year tenure before the end of last season. The determination to prise Koeman from St Mary’s has led to the British-Iranian billionaire meeting Southampton’s demands after several days of negotiations.

Moshiri has also agreed to pay the former Ajax, Valencia and Benfica coach around £6m a year at Goodison Park and tempted him north with the promise of the biggest transfer budget in Everton’s history. Koeman, 53, will receive substantial funds in addition to the proceeds of Romelu Lukaku’s anticipated sale and possibly that of John Stones.

Koeman will be joined on Merseyside by his brother Erwin and compatriot Jan Kluitenberg, Southampton’s assistant manager and first-team coach respectively. Other members of the back-room team, the former Liverpool player and coach Sammy Lee and the goalkeeping coach Dave Watson are not part of the compensation package agreed with Everton and to remain with Saints.

Ah fink he’s cool, wishing him all the best though…